We are a website created in honour of Robert (Bob) John Sharplin, his shipmates, and every other person who served on the first and second Ajax.

Welcome to H.M.S. Ajax at Crete

We also dedicate the website to the Town of Ajax, Ontario, Canada, whose community named their town after this ship and its streets after the names of the crews of not only both ships but also those who served in the other Royal Naval ships that took part in the Battle of the River Plate, Achilles and Exeter. Bob’s name is commemorated there by “Sharplin Drive”.

This site’s original intention was purely to promote sales of prints of the painting commissioned by Clive and Wendy Sharplin, the children of Bob Sharplin, to commemorate the 100 years of their father’s death. The website also describes the detail of the action behind it and its historical place in World War 2. With the increasing amount of information uncovered during the research for the painting, the early decision was made to widen the project. The information gathered could be easily accessed by Bob’s family or possibly to assist others in their branch of research, hence creating the website. 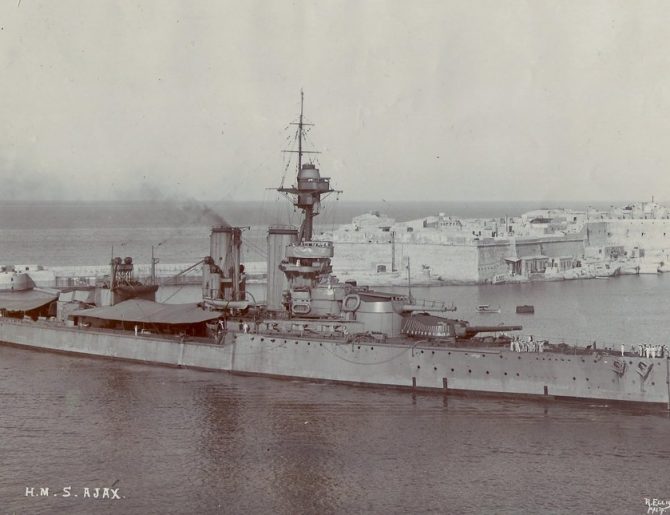 The Ajax is a light cruiser in the Leander class. The ship was launched on March 1, 1934, and by April 12 1925, it was completed. Three days after that, it was commissioned as Ajax. It became the seventh Royal Navy warship with that name.

The incident depicted in the painting happened in May 1941 during the Crete campaign. It all started after the German army captured Greece in April of that year, forcing the Royal Navy ships, including Ajax, to evacuate around 30,000 troops who were mostly ANZAC with some Greek and British troops. They were evacuated to the island of Crete.

The painting is an exceptional piece as far as Navy memorabilia goes. It depicts confrontational energy and the mere sight of watching as the Royal Navy displays all the qualities that have sustained it for years. You can get it in prints.

The Ajax is one of history’s highlights, thanks to its impact on the way things played out during the Second World War. In turn, it was no surprise that today, a town in Ontario, Canada, is used to remember the significance of the Ajax.

Bob Sharplin is the short form for the name Robert Sharplin. He applied to the Royal Navy on June 4, 1929, at the Medway Towns recruiting post in Kent. He had just volunteered to commit himself to the service of the King for 12 years. However, while he had planned to spend the next twelve years in the King’s service, he was unaware that the world held a different plan for him, and he would spend almost 24 years.
Click here to read more.
Click here to read more.