About the painting and the prints 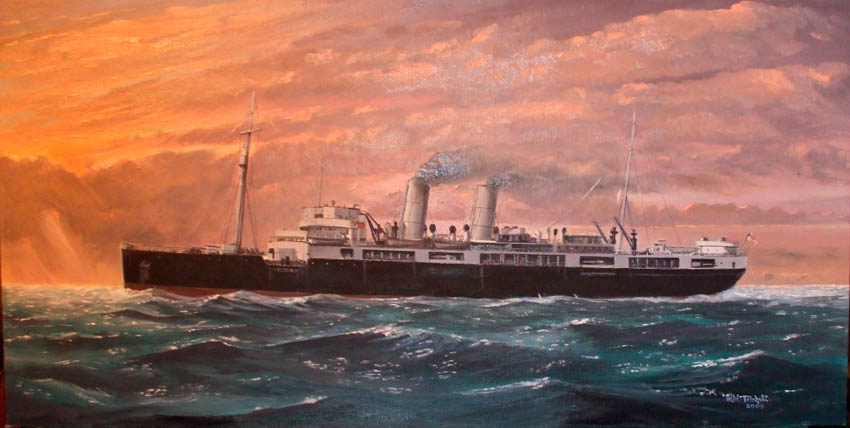 Clive Sharplin and Wendy White commissioned the painting of the incident in Crete to commemorate the centenary of their father’s birth on June 4, 1911. Their father, Robert John Sharplin, was the Chief Mechanician First Class, Chatham Division, Royal Navy. It is dedicated to their father, his shipmates, and every other person that served in the H.M.S. Ajax and the one after it, the Ajax Frigate, and the Ajax town in Ontario, Canada.

0915 on May 21 1941, was the moment Ajax log reported that ten Ju 87 dive bombers had attacked the ship with port shaft damage and near misses. It is this moment when ten dive bombers attacked the ship that the painting sought to capture. While the whole attack only lasted for 7 minutes, it must have felt like an eternity for the crew. In the painting, the ship is depicted to be working at its highest speed as it starts an evasive hard turn in line with her orders to manoeuvre to avoid.’ The attack finally stopped at 0922. That wasn’t the only attack on the Ajax that day. At 1050, two Stukas attacked and later in the afternoon, there was another attack that lasted for two hours. In the evening, there was another one. All these attacks were repelled successfully.

The painting is an exceptional piece as far as Navy memorabilia goes as it depicts confrontational energy and the mere sight of watching as the Royal Navy displays all the qualities that have sustained it for years. This is the kind of gift you can get for anyone who is linked to the H.M.S. Ajax or the Royal Navy or anyone who has an interest in maritime history.

The painting is available in colour prints of various sizes that can complement any space you place it. AN 80+ megapixel camera was used for the original picture of the painting that was processed and printed. Some of the best printers in the country were used to ensure that the colour and definition as it exists in the painting is what is replicated in the photographs too. There are also the limited edition fine art prints that use the Giclée process for printing on paper certified by a specialist that has a life expectancy of more than 100 years if placed in gallery conditions. This means you will have the maximum stability and durability, which will ensure that the colours and freshness of your Ajax print will remain intact for generations. These prints are unframed so that they can be easily shipped. Thus, the owner of the print has the freedom to choose the framing that works for them. There is the motto of the ship at the top and the ship crest on a border. The lower border has the title of the work plus the date of the incident depicted and the name of the artist. The owner can always leave the border on or choose to remove it. Every print is delivered in a strong cardboard tube. For those within Australia, the delivery is through the registered post, but it is through registered airmail for the overseas deliveries. There is a leaflet that explains the event depicted, and it comes with each print. You can also get the print in the form of a greeting card that is folded and has a blank interior. 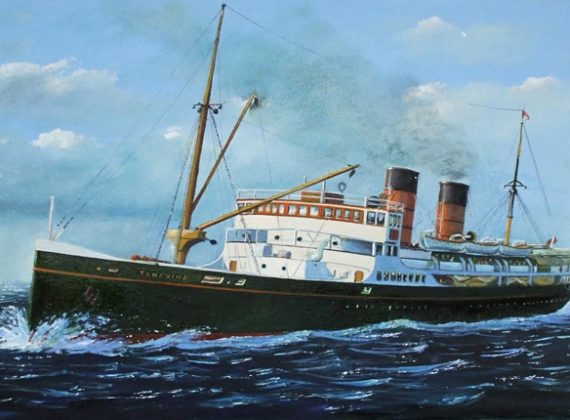 Wallace Trickett lives in New Zealand with his studio close to Wellington. He is a renowned professional artist who is recognised and respected in the United Kingdom, Asia, Australia, and the U.S. He worked as a cartoon artist for magazines and newspapers in New Zealand for 25 years before retiring in 2009 to focus on his painting. He is a multi-talented artist who can paint across every genre, but he is specialised in transport with a focus on ships. He has done commissioned work for Maersk Line and B.P. Oil (N.Z.). Most Maersk Line ships have at least a painting of his in their interior decoration. His work has also been published all over the world in Trade Journals, Books, Magazines like ‘Sea Breezes’ and illustrate book covers such as Sailing the Seven Seas of History’.

He has had several exhibitions of his work in New Zealand, including private exhibitions that are solely for his work.  He has the largest transport mural in the country with the transport montage at the Southward Car Museum. In 2010, two of his paintings were mentioned in the London Battle of Britain Ceremony. These paintings were commissioned by Air Marshal Sir Keith Park’s family and depicted the Southern Railway locomotive named after him.

Wallace spent five years working as Engineer Officer for Blue Star Line, and this has inspired one of his works in progress; a portrayal of each of the ships that the company has owned since they started in 1911. He has finished 109 already, which have been sold to different owners all over the world. His naval works also include H.M.S. Rodney in action against Bismark and H.M.S. Achilles at the River Plate Battle.

Tony Knight is the printer. He is one of the most reputable and awarded printers and photographers. At the 26th Australian National Print Awards, he won the “‘Best of the Best’ Judges Choice Award for Outstanding Excellence.”

The company is located on the eastern fringes of Melbourne within a state of the art studio and still provides specialist and limited edition Archival Art Giclée Prints. Absolute commitment and strong client partnership are why we choose to associate with Tony.